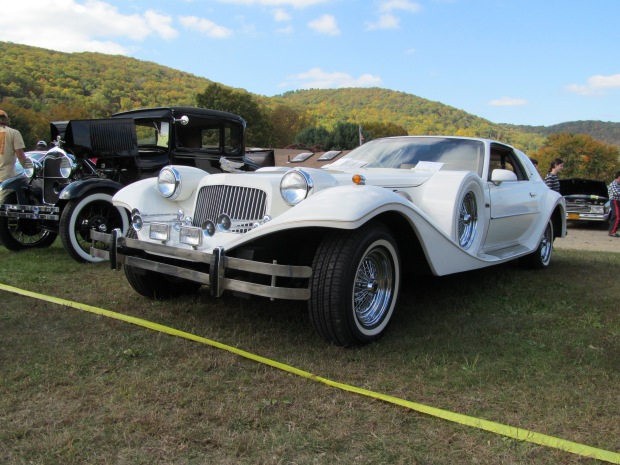 Here’s a car that’s so tacky, it defies witty explanation.

The Zimmer Golden Spirit is the product of two of the most dangerous forces in the car industry: retro styling and startup companies.

The Zimmer is a “neo-classic;” a car sub genre popular in the 1970s and 1980s that married exaggerated vintage styling with modern components.

That’s why, even though this Golden Spirit looks like a cartoon version of a Duesenberg, it’s actually a Lincoln Town Car.

That blending of elements apparently appeals to some people, including the owner of this example, which I found sitting on the field of the New Fairfield (CT) Lions Car Show with other, more normal cars.

Normality isn’t a good things when it comes to cars, though; it’s already populated the world with enough Toyota Camrys. If nothing else, the Zimmer Golden Spirit shows that not every car has to make sense. 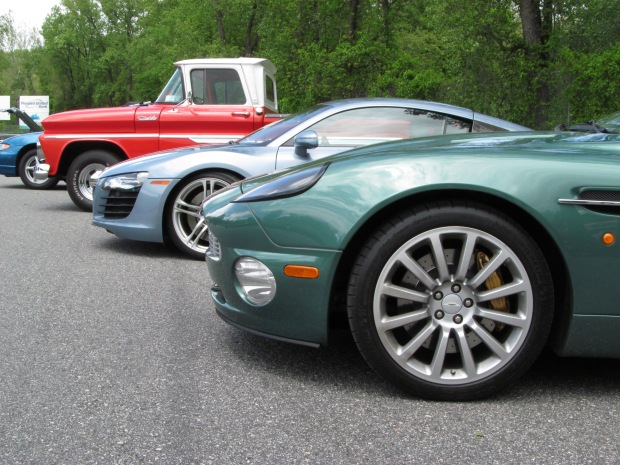 Last weekend was Memorial Day, the unofficial start of summer and car show season. I spent Sunday at the Sunday Royals Garage Car Show at Lime Rock Park, and saw nearly every type of car imaginable lined up on the same main straight that usually hosts Le Mans prototypes an Trans Am racers.

The show was a little small because of the weather, but there was still an outstanding variety of cars. Here are my top five favorites: 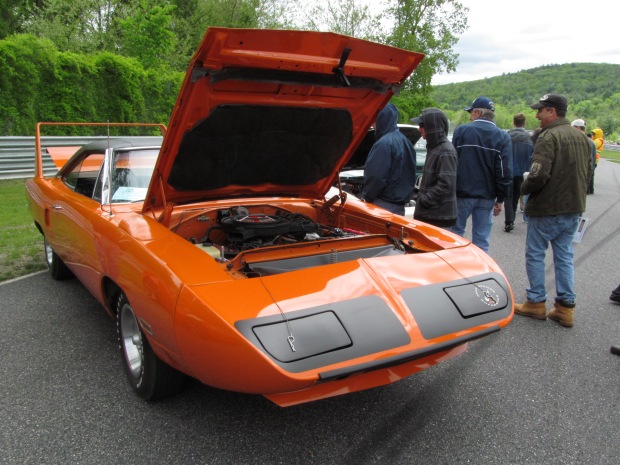 You may have seen Vin Diesel driving this car’s twin, the Dodge Charger Daytona, in the latest Fast & Furious movie. It’s a Plymouth Road Runner with the best aerodynamics the 1970s had to offer, making it the perfect weapon for a NASCAR oval. Today, the Superbird is one of the rarest muscle cars around, so I was excited to see this Hemi Orange example at Lime Rock. 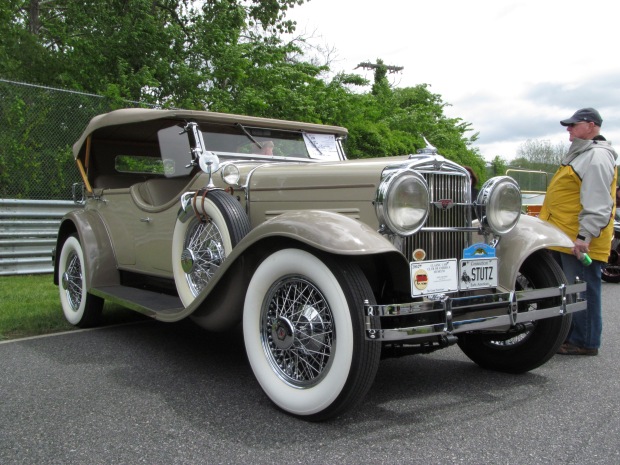 You rarely see a car this old out and about, unless it’s a ubiquitous, mass-produced Ford. In addition to having one of the coolest names ever, the Blackhawk represents a time when most cars of a certain price really were one-of-a-kind, thanks to their custom bodywork. Stutz was also one of the first great American marques, known for the Bearcat sports car and its heated rivalry with Mercer. 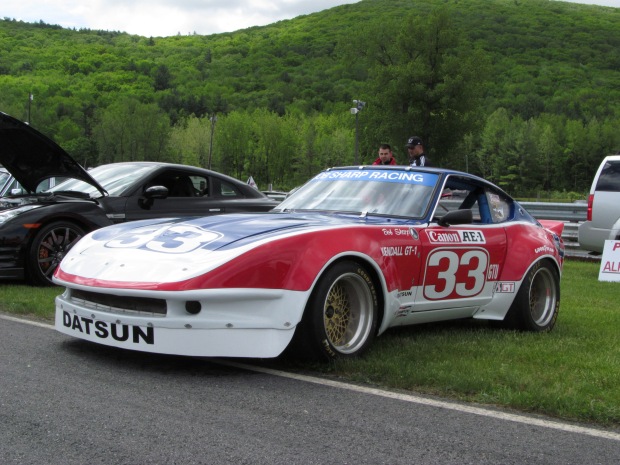 It’s hard to argue with a wide-body 240Z in red, white, and blue, but this car had special resonance for me. Bob Sharp was one of the first American Datsun/Nissan dealers, and did a lot to promote the brand through racing cars like this one.

My parents bought our first new car after moving to Connecticut at what used to be Bob Sharp Nissan, so the local connection made this slick 240Z that much more special. 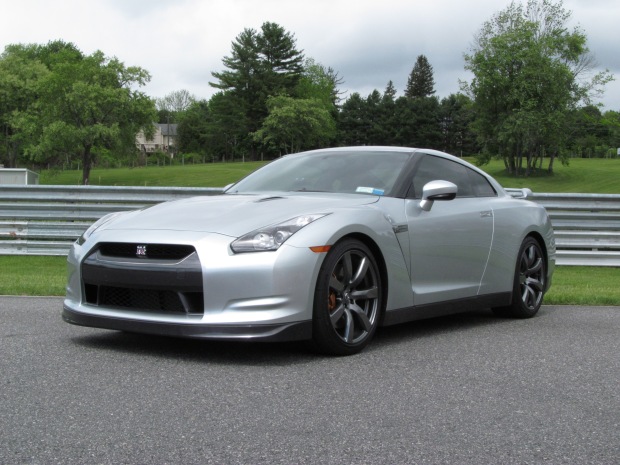 There were actually three copies of Nissan’s all-conquering sports car at Lime Rock, but that doesn’t exactly make it common. The GT-R is an all-wheel drive, four-seat coupe that can dice with a Porsche 911 Turbo at the Nurburgring, all for a (relatively) affordable price. Unlike that Porsche, or certain Italian cars that will go unnamed, the GT-R really is a performance car that you can imagine living with every day. 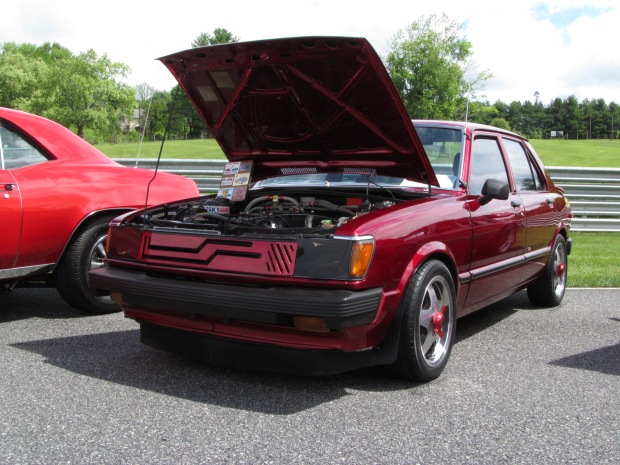 I heard the show’s MC talking about a 1980 Tercel over the loudspeakers and thought he was joking. I hadn’t seen the car.

Bringing a Japanese economy car to show that also featured an Audi R8, Aston Martin Vanquish, and three Nissan GT-Rs takes a lot of chutzpah, which this little car and its owner had in spades.

The car looks perfect slammed onto those chunky wheels, and under the hood is a souped up engine that was basically made from scratch. They don’t sell many performance parts for Toyota Tercels.

The future of nostalgia 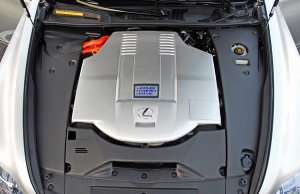 The chrome gleamed in the sun as golden oldies blared on speakers. It was a car show where, like so many across the United States, the most desirable rides of yesterday lined up for their adoring fans. It makes one wonder: does this kind of thing have a future?

The foundation of the classic car hobby is the lone tinkerer who takes on a restoration as a weekend project; open a magazine like Hemmings Classic Car and you’ll find dozens of these stories.

The problem is that new cars, the antiques of tomorrow, are getting harder to work on. With yards and yards of wiring controlling everything, today’s cars are very complicated. Engines won’t start unless dozens of sensors for everything from the fuel pump to the gauges are connected.

Some companies, like Volkswagen, use specialized screws and bolts that make simple tasks nearly impossible if one doesn’t have the correct tools.

Patching a rusted steel panel is a relatively simple matter, but new cars include many materials, such as plastic, aluminum, and composites, that are difficult to work on at home. That also means replacement parts will be more expensive: the catalytic converters on a 2005 Subaru Outback are full of precious metals, and cost thousands of dollars each.

The problems aren’t just technical. There are some great cars on the road today, but people don’t seem to have the emotional attachment that collectors share with their chromed and finned 1950s cruisers or ‘60s muscle cars.

A new Corvette would destroy its vintage counterpart, or any vintage Ferrari or Porsche for that matter, in any race. Yet it doesn’t turn heads the way the 1960s Stingrays do.

Back in the day, cars loomed large in popular culture, but now they have to share the spotlight with other consumer items like smart phones and tablets (who knows, maybe those will become collectible).

Car show denizens shouldn’t despair, though. There are still plenty of dedicated gearheads (just look at the plethora of car magazines and automotive reality shows) who care about nothing else. As the saying goes, “Where there’s a will, there’s a way,” even if future car restorers have to learn a little more about software.

There is also a significant aftermarket industry that makes everything from trim pieces to tires for the current crop of classics. If enough people want to restore a 2012 Volkswagen GTI or Dodge Charger in 25 years, there will certainly be a business case for said companies to produce parts for those cars that can’t be fabricated in a garage.

The classic car hobby probably won’t go away, but it will face a few challenges. This hobby may be all about nostalgia, but even people who love the past (definitely not a crime) need to think about the future.

Car shows are stuck in the ’50s

A trip to a large car show last weekend reminded me of one of the most puzzling aspects of the show scene: the music. There is music wafting from the loudspeakers at every car show, to create atmosphere, I guess, and it is always from the 1950s. To the show n’ shine crowd, Elvis is still king.

To clarify, this was a vintage car show, as are most of the popular public events held throughout the summer in the U.S. I wasn’t expecting the DJ to blast Lady Gaga, but the organizers should have been more conscious of the variety of eras the assembled cars represented.

Yes, there were many 1955-57 Thunderbirds, Buick Roadmasters, and Cadillacs with pedestrian-impaling tail fins. But the cutoff date was 1971, so there were many cars from the 1960s, from Buick Rivieras to Camaros and Chargers. There was even an E-Type Jaguar.

At car shows, music is supposed to create a nostalgic ambiance, but don’t the people reminiscing about their youth in the Kennedy/Johnson years want some era-appropriate songs?

It’s not like there is a lack of choice. In 1967, Chevy brought out the Camaro, and the Beatles released Sgt. Pepper’s Lonely Hearts Club Band. If you bought a Hemi Charger in 1968, Jimi Hendrix’s cover of All Along the Watchtower would be one of the newest songs on the radio.

If going to a vintage car show is all about reliving the “glory days,” people should not be subjected to music that was out of style when the now-45-year-old muscle cars were new.

In fact, music choice should work the other way, too: if a Model T shows up, play some ragtime, or crank some big band tunes for the military enthusiasts in their WWII Jeeps.

Cars are a major part of American popular culture, and that connection is not confined to the 1950s. You can only listen to the “Golden Oldies” so many times.