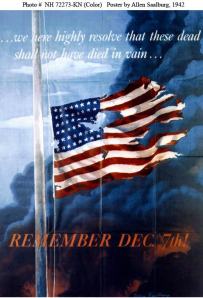 I never thought I’d see the day when World War II became a source of irony. It was the definition of “good fight,” a time when the nation harnessed all of its resources to defeat what one of my high school history teachers called “made to order bad guys.”

Yet here we are. Barbasol is running a commercial featuring the viewer’s “ great grandfather” on the ground in a French village, perhaps Ste.-Merie-Eglise or St.-Lo, laconically comparing his attempt to stop Hitler with the current young generation’s obsession with tweeting and Facebooking.

Like “first world problems,” this is another example of a perverted form of thought. Its as if people think that, by noting their shortcomings in an ironic way, they don’t have to actually do anything about them.

It’s also a silly comparison. I’m not saying that my generation is perfect, but it’s not really fair to compare us to the “Greatest Generation.” We’ll never know how the social media-savvy would deal with a Great Depression or a World War, because we lived through a Great Recession and a pseudo-War on Terror.

Twitter and Facebook can lead to some shallowness, but we’ll also never know what our grandparents’ generation would have done if they grew up with these luxuries. I recently ate lunch at a restaurant packed with senior citizens, and most of them had smartphones.

Maybe we should cut back on the irony before we lose track of what we’re making ironic jokes about. This reminds me of a New York Times blog post I read recently called “How to Live Without Irony.” The author argued that too many people are using irony to avoid honest (and sometimes painful) emotional commitments.

That seems like what’s going on here. People need to accept the fact that they’re better off than others, including their own grandparents and great grandparents. That’s what those World War II soldiers were fighting for, after all.

This entry was posted on February 6, 2013, 2:42 pm and is filed under Language, Media, Old Stuff. You can follow any responses to this entry through RSS 2.0. You can leave a response, or trackback from your own site.