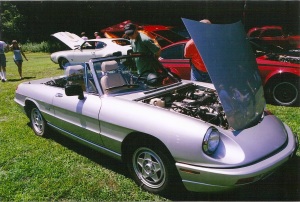 Spotted amidst the American muscle cars at a local show is something everyone can recognize, but few actually know: the Alfa Romeo Spider.

The Alfa Spider is a traditional European sports car: a small, light, two-seater powered by an equally small engine that loves to rev. The emphasis is on handling rather than outright speed; European roads are narrower and curvier than America’s.

In the years before World War II, Alfa Romeo made some of the world’s most exclusive cars. Models like the 8C 2300 and 8C Mille Miglia won races and cost a fortune. As Italy rebuilt itself after the destruction of the war, Alfa was assigned by the Italian government to build affordable cars to remobilize the population.

Since then, Alfa has been known for bringing the Italian flair normally ascribed to exotic brands like Ferrari and Lamborghini to cheaper sports cars and sport sedans. The Spider is the most iconic of those postwar cars, thanks to its starring role alongside Dustin Hoffman in The Graduate.

The hosts of Top Gear claim that every real car enthusiast needs to own an Alfa Romeo, because Alfas have and authentic “soul” that other cars don’t. They’re right, but not just because of Alfas’ positive attributes. These are some of the most unreliable cars ever made: every electrical or mechanical system will fail if the body doesn’t rust into oblivion first. Owning an Alfa takes dedication, the kind of dedication only a true petrolhead could muster.

However, a great car is not necessarily a great car person’s car. BMWs appeal to car enthusiasts; they are great to drive. But, since they are also well built status-symbols, they also appeal to non-enthusiasts and, worse, poseurs. Someone who isn’t interested in cars would never put up with the trials of Alfa ownership, and since the brand has no snob-factor (if not for The Graduate, few Americans would know they existed), they can’t use their Alfa to show off.

The Alfa Romeo really is the ultimate enthusiast’s car. It’s great to drive, unique, and designed with the passion of fellow car enthusiasts. And, most importantly, no one else would be crazy enough to buy one.

This entry was posted on September 3, 2011, 3:27 am and is filed under Cars. You can follow any responses to this entry through RSS 2.0. You can leave a response, or trackback from your own site.